GETTING TO KNOW HINDUISM 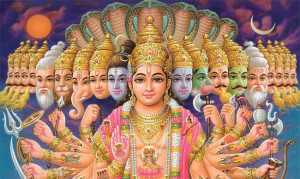 Hinduism, Jainism, and Sikhism were the hardest one’s to grasp, to me. It just seems so evasive, but what do I know? Apparently, it is the oldest living religion in the world, or at least elements within it. Hinduism seems to be a vast array of practices and beliefs. Unlike most other religions, Hinduism has no single founder, no single scripture, and no commonly agreed set of teachings. They believe in concepts such as karma and reincarnation. However, they do believe in a Supreme God, whose qualities and forms are represented by a multitude of deities which emanate from him. That was the only place I can really relate. So I dug some more into this Supreme God and Bingo!

I found a commonality, a prophet of sorts by the name of Adi Shankara. Now Adi was never proclaimed a prophet, but he was a Hindu philosopher and theologian from India placed sometime in early 8th century. He wrote and discussed the unity of the ātman (soul) and Nirguna Brahman or Para Brahman (Supreme Cosmic Spirit)…Sounds like God to me.

You know who else died at 33 years of age? Jesus.